Belval is an ex-industrial site in the south of Luxembourg, undergoing vast changes in the last couple of decades. It used to be the center of the Luxembourg steel industry, and today with its unique urban development project offers the possibility to up-cycle and integrate its rich industrial heritage in a contemporary setting. Two sintering ponds lost their purpose decades ago when the blast furnaces ceased to operate and were abandoned ever since.

In the context of the new urban development, this particular location will host a new central square, ‘Place des Bassins’, giving a new life to this forgotten lieu. 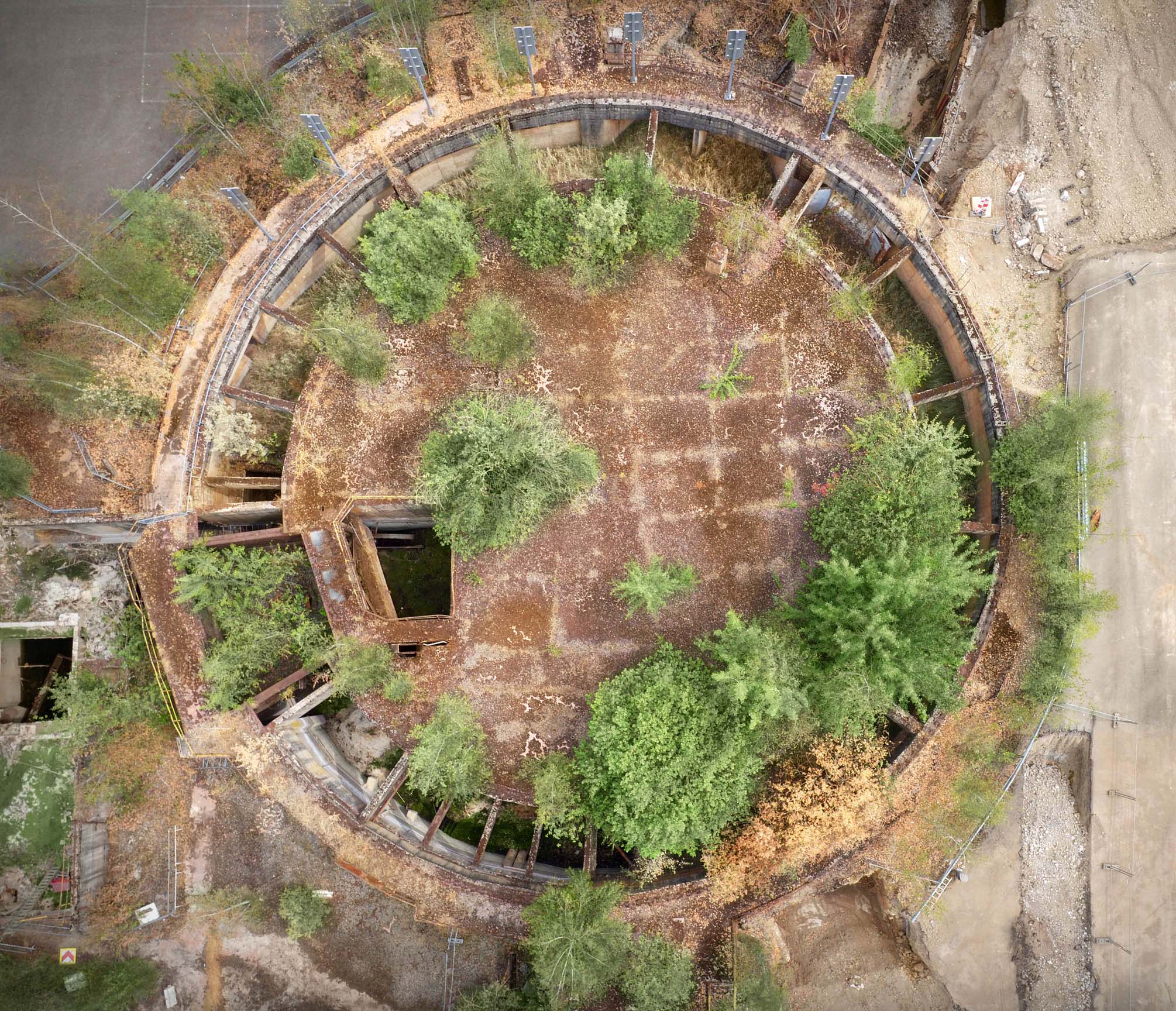 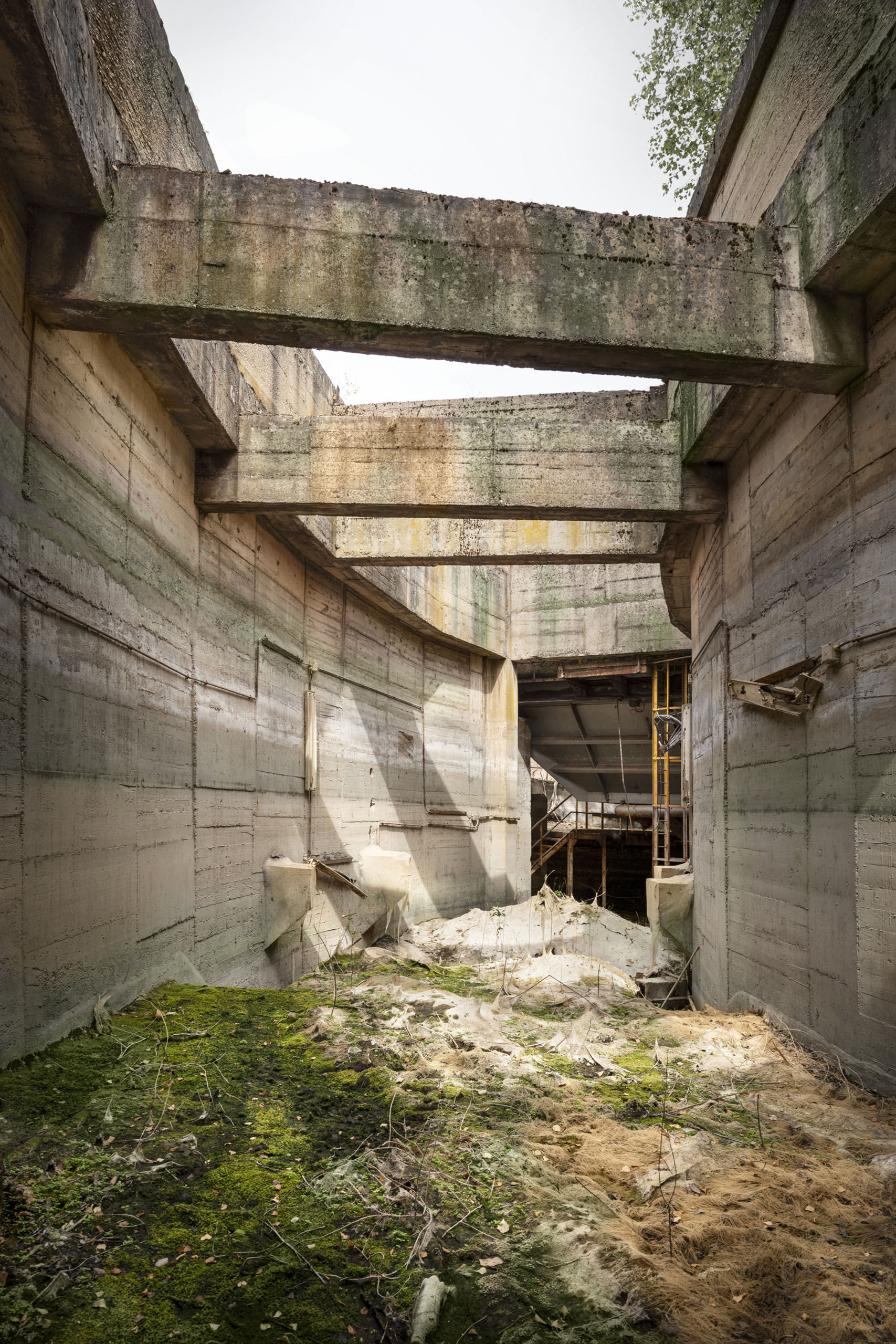 How to engage in adaptive reuse and respect the industrial culture? 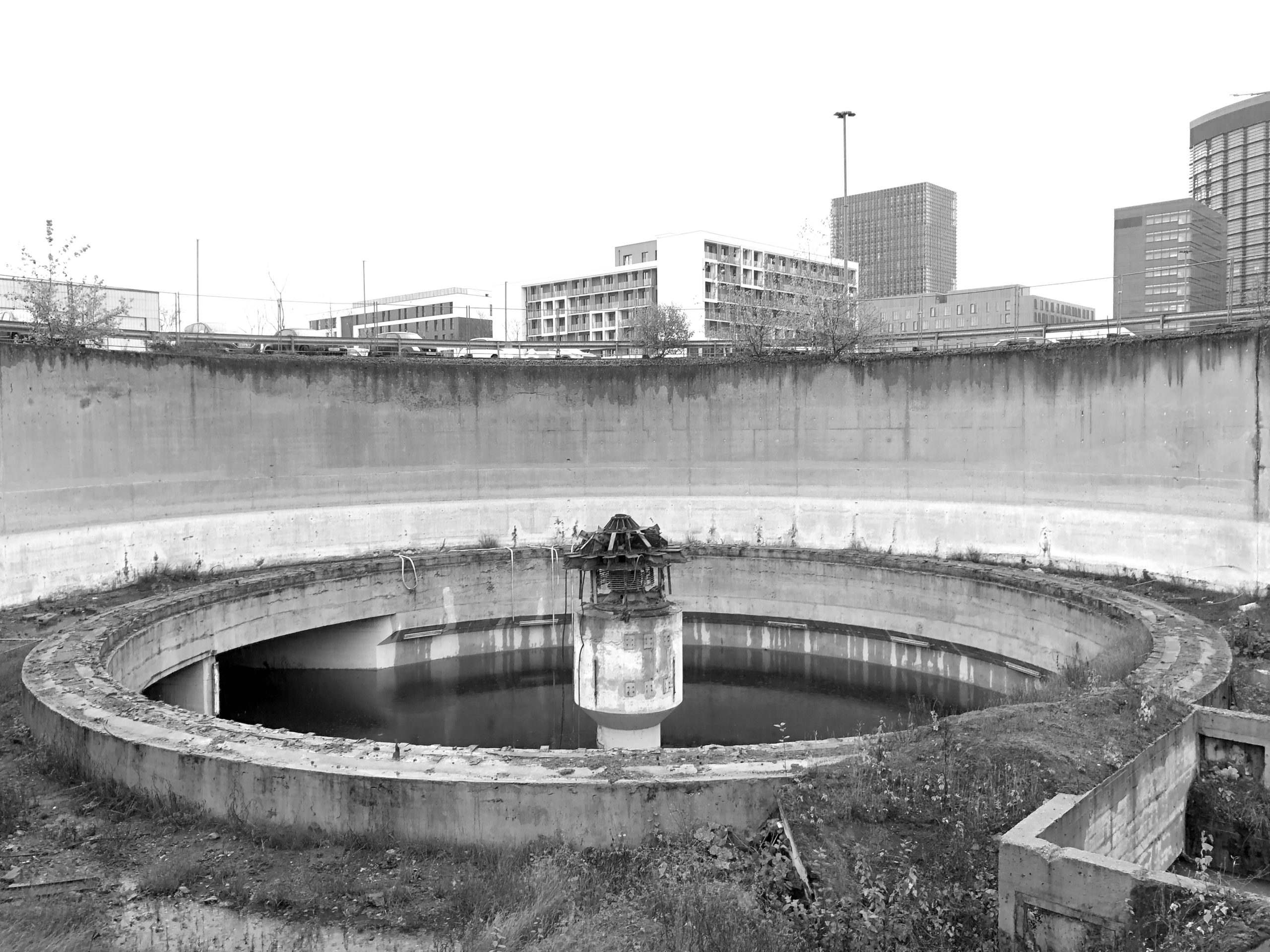 How was the infrastructure used?

The original role of the sintering ponds was to cool the sinter. The coal was transported across long underground tunnels all the way from the sinter furnaces, some 500 meters away. Sinter was first cooled down in the north pond, then to be additionally cooled in the south pond in a circular motion, after which it was channeled back to the furnaces.

We wanted to explore the idea of a constant motion and base the concept around it.

Firstly, we identified what was worth preserving. Keeping the round form of the ponds was essential, to maintain their visual aspect and identity of the site.

The process of cooling the sinter further inspired us to approach the design with movement in mind as a main driving force. Considering that the ponds were going to host a new central square of the neighbourhood, we aimed to ensure a fluid connection between two sides of the main walking street, and across various levels of the ponds. 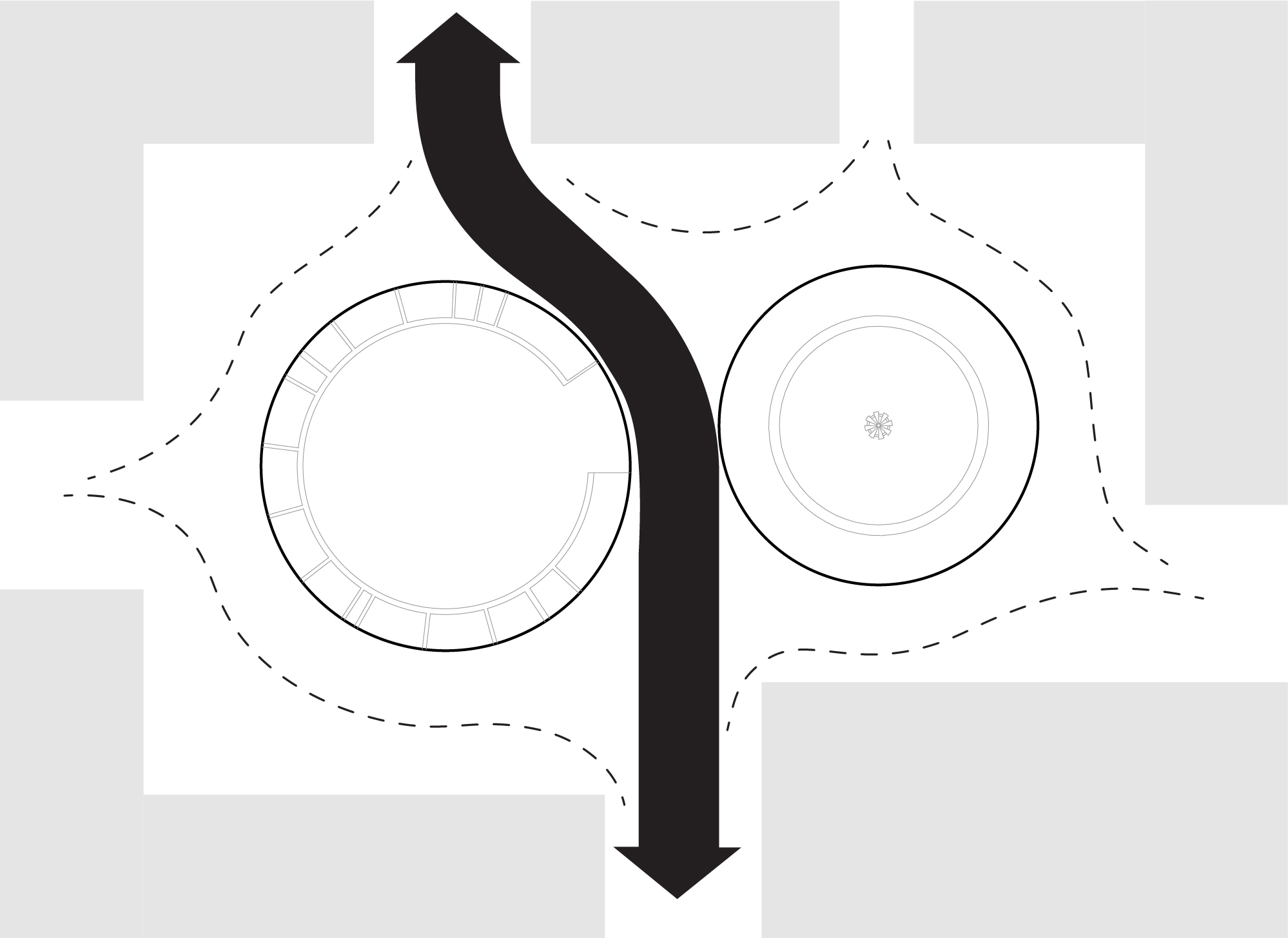 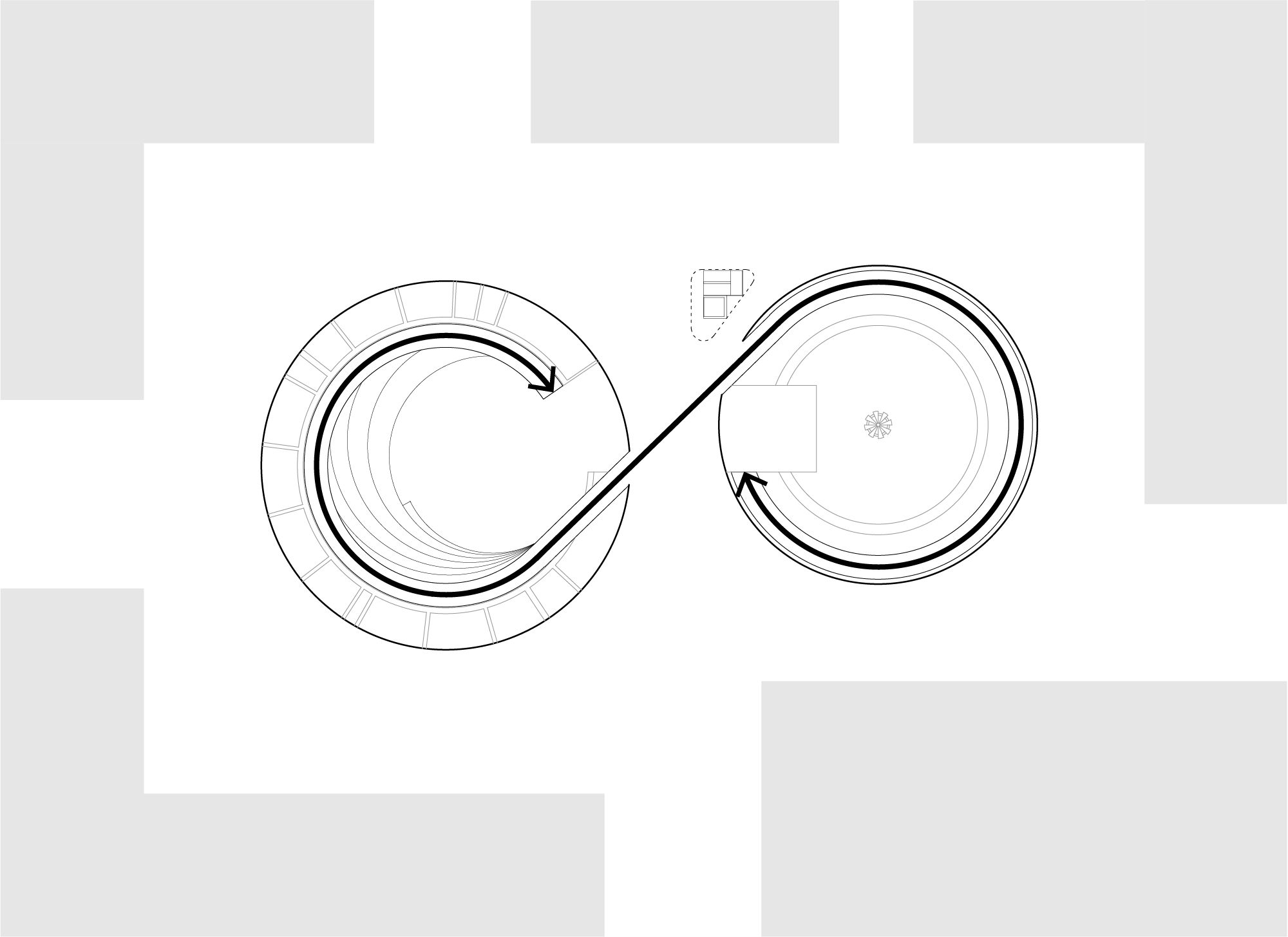 Inside the ponds, an infinite loop ramp connects two sides in a continuous motion, joining the upper plaza and the lower underground levels. The public space is democratic and inclusive, accessible to all.

The former motion of the sinter is symbolically represented through the motion of people walking through the ponds, and the site will finally regain its past dynamics. 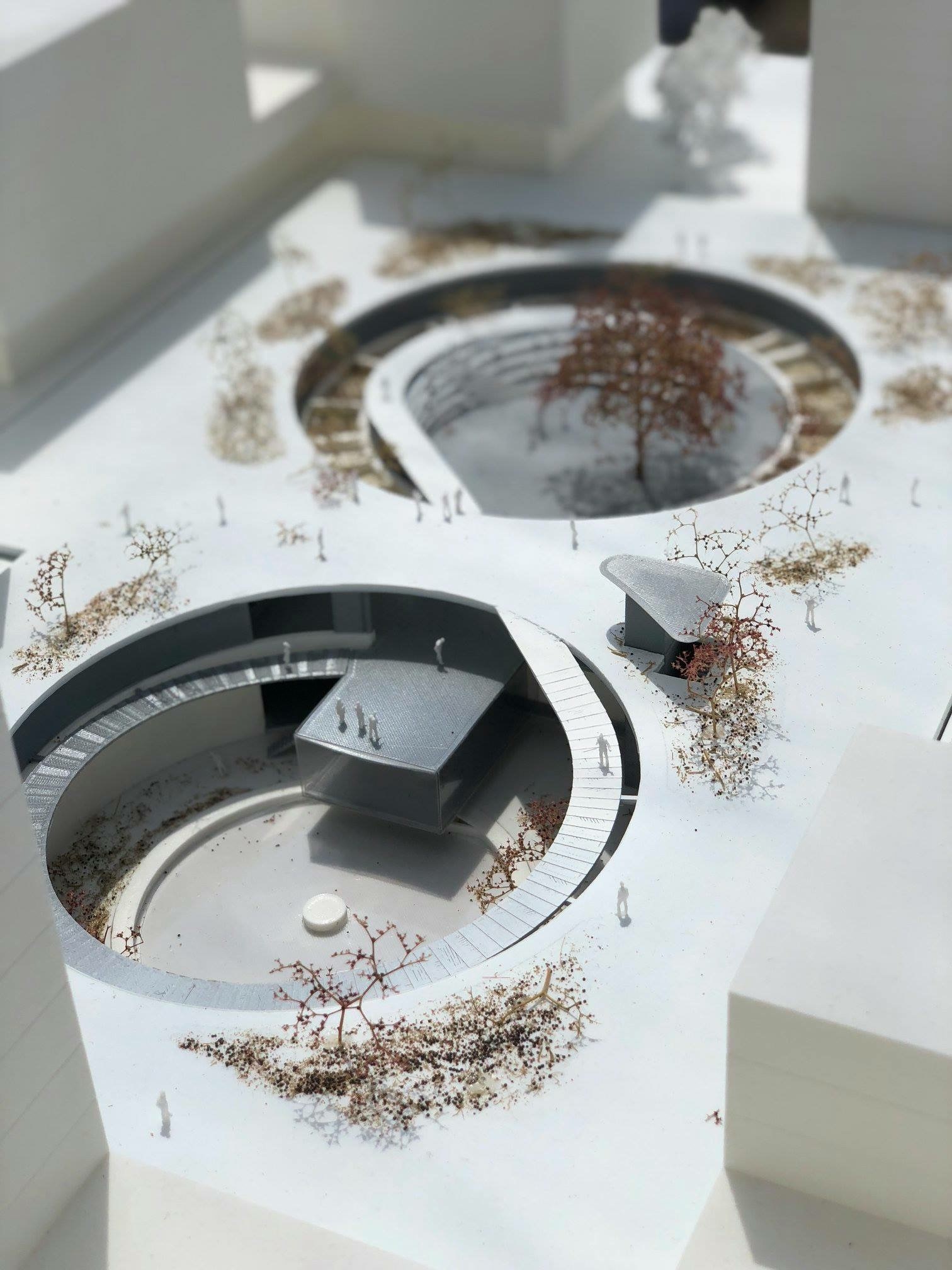 The existing infrastructure is preserved and displayed almost entirely: the original concrete walls of the ponds are restored, the beams of the south pond are maintained. The loop ramp invites the visitor on a journey to explore the underground vestiges. A setback from the round concrete wall ensures the respect and preservation of the existing, allowing the visitor to fully immerse in the historical adventure. The architectural intervention tends to be minimal and discrete, leaving the ground to the heritage and revelation of the industrial vestiges.

“...a work of art, an ambitious concept for the use and creation of public space that contributes to the creation of a high-quality living space.”
Vincent Delwiche, Managing Director of AGORA, on the Place de Bassins design

The south pond’s outside corridor remains visible and intact. Vegetation and trees are planted in between the concrete beams, allowing nature to overtake and merge with the vestiges. An open-air amphitheater is to host a democratic shared space, and a sunken round stage will provide opportunities for various usages. It will be a place accessible to all, to see an open-air theatre play, attend a concert, shop in an open-air market, or simply eat lunch on a sunny day.

The former cooling pond will obtain a new life, to tell stories about the site’s industrial past and foster new interactions of the worthwhile future.

In its former life, the north pond was filled with water used to cool the sinter. To keep the intervention minimal and as respectful as possible, the water mirror installation on the bottom of the pond symbolically embodies the spirit of the past. A restaurant is positioned between the two ponds, offering views to both sides. A floating ‘aquarium’ overlooking the water mirror allows visitors to get as close as possible to the center of the pond and its history, offering a unique spectacle. On the pond perimeter, trees and vegetation have been planted to further enrich the space and complete the incredible scenery.