Award Winner
“Architecture can please or displease. Independent of personal opinion, it should become the object of an open general debate in order to enrich our building culture.”

The monolithic character of the building is in stark contrast to the neighbouring buildings, differing from them both in form and in construction materials. The project emerges as a unique object, a juxtaposition of simple and pure volumes. The use of a single material, a shiny black metal, lends it its monolithic and ‘plastic’ character. 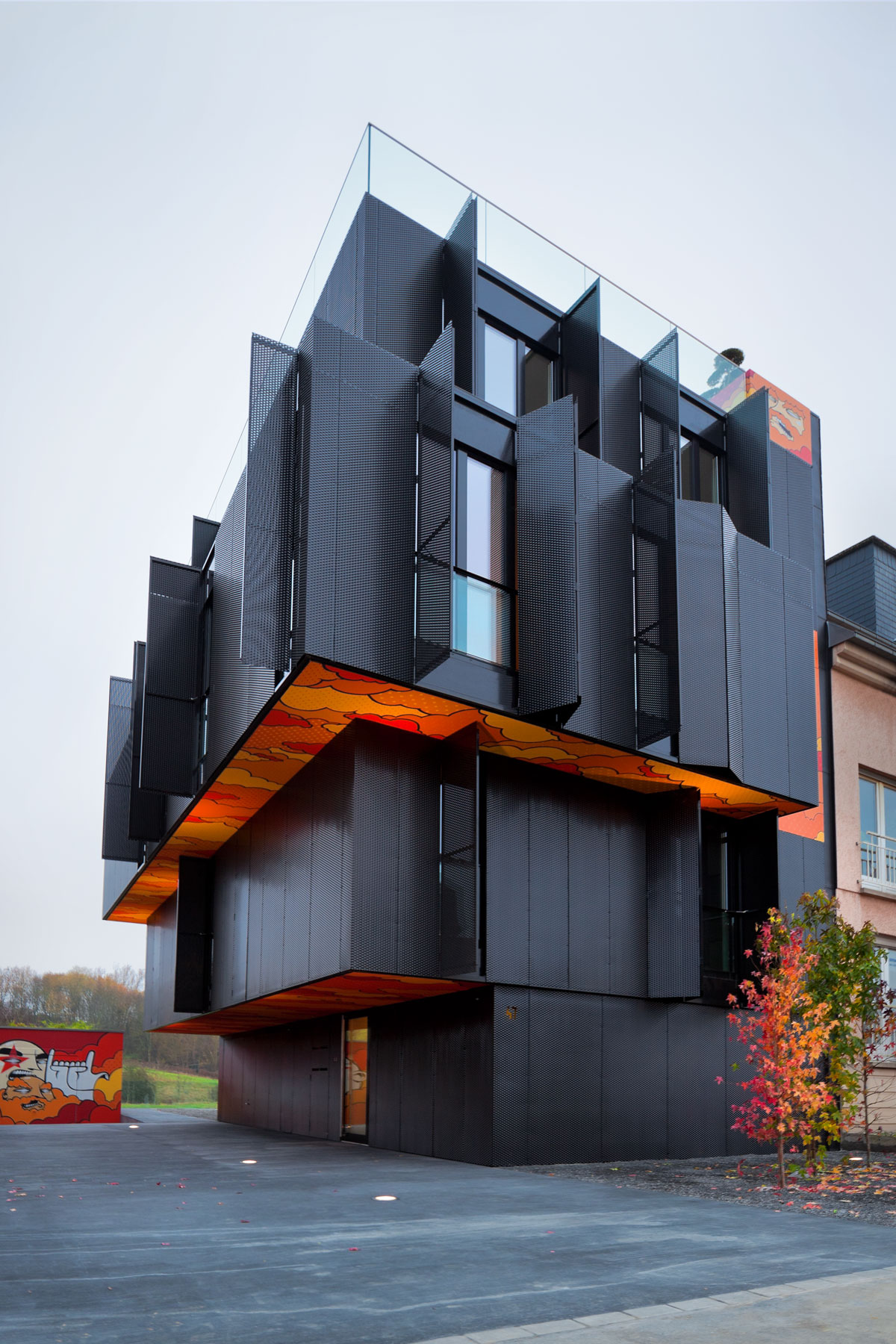 A monolith confronts the neighbourhood.

This project is an answer to the evolution of the urban landscape, that has become an integral part of the city. The Luxembourgish artist SUMO intervened through the building from the ground to the roof, subtly integrating his art with the volume of the new construction.

Architecture and art coexist, intermingle, enrich and complement each other to find a common language, a synergy that creates an integral ensemble, living, dynamic, but also welcoming and warm. 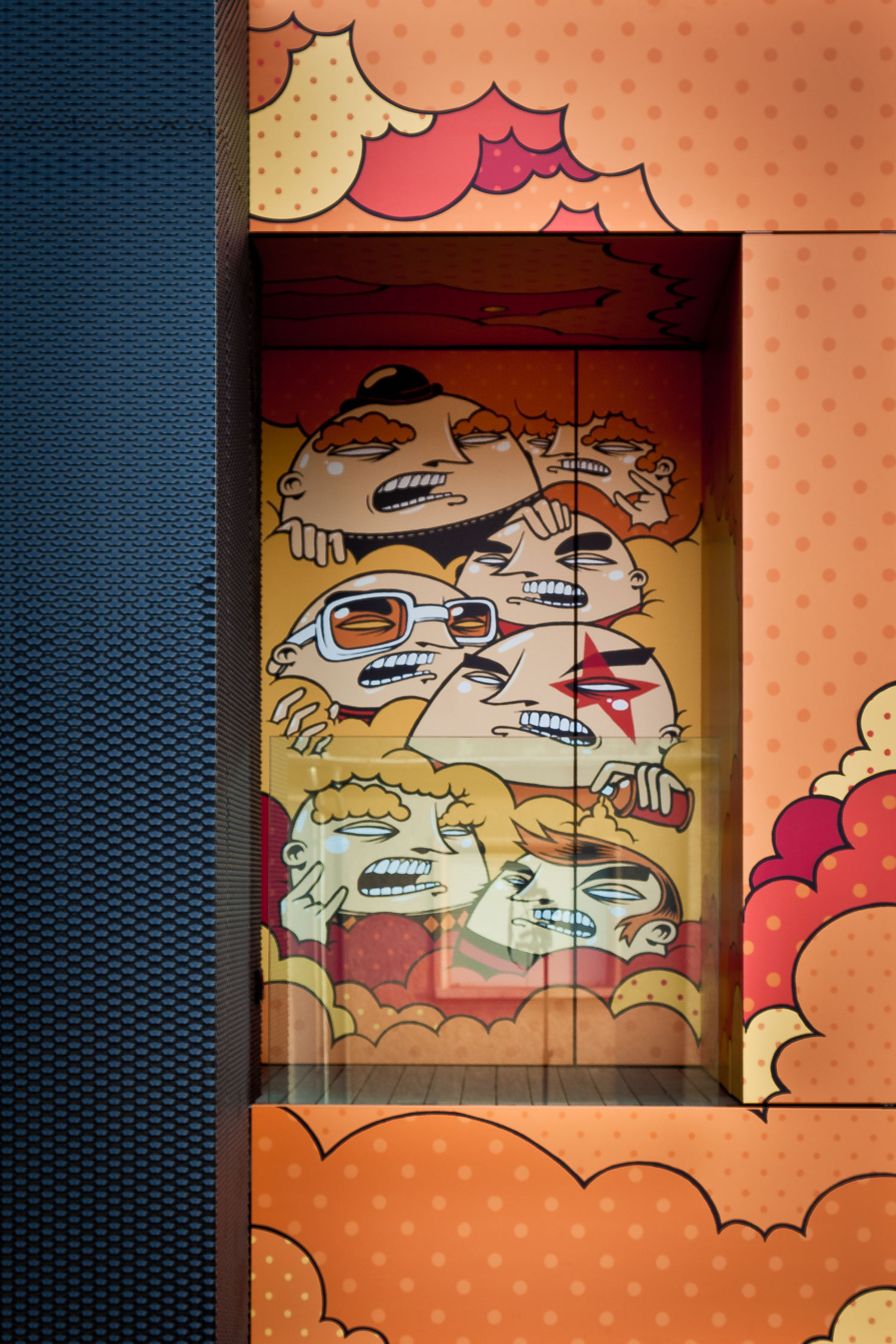 “The first thing I do, is to destroy the white space… Layer by layer. I fill out the space and paint over it again, impulsively… It’s a cycle of destruction followed by creation….”
SUMO

This mise-en-scène is staged by the architect and the artist as a medium of communication. The elements are breaking the rules of traditional architecture because the surfaces that are usually ‘abandoned’ in architecture are emphasized by the artist. 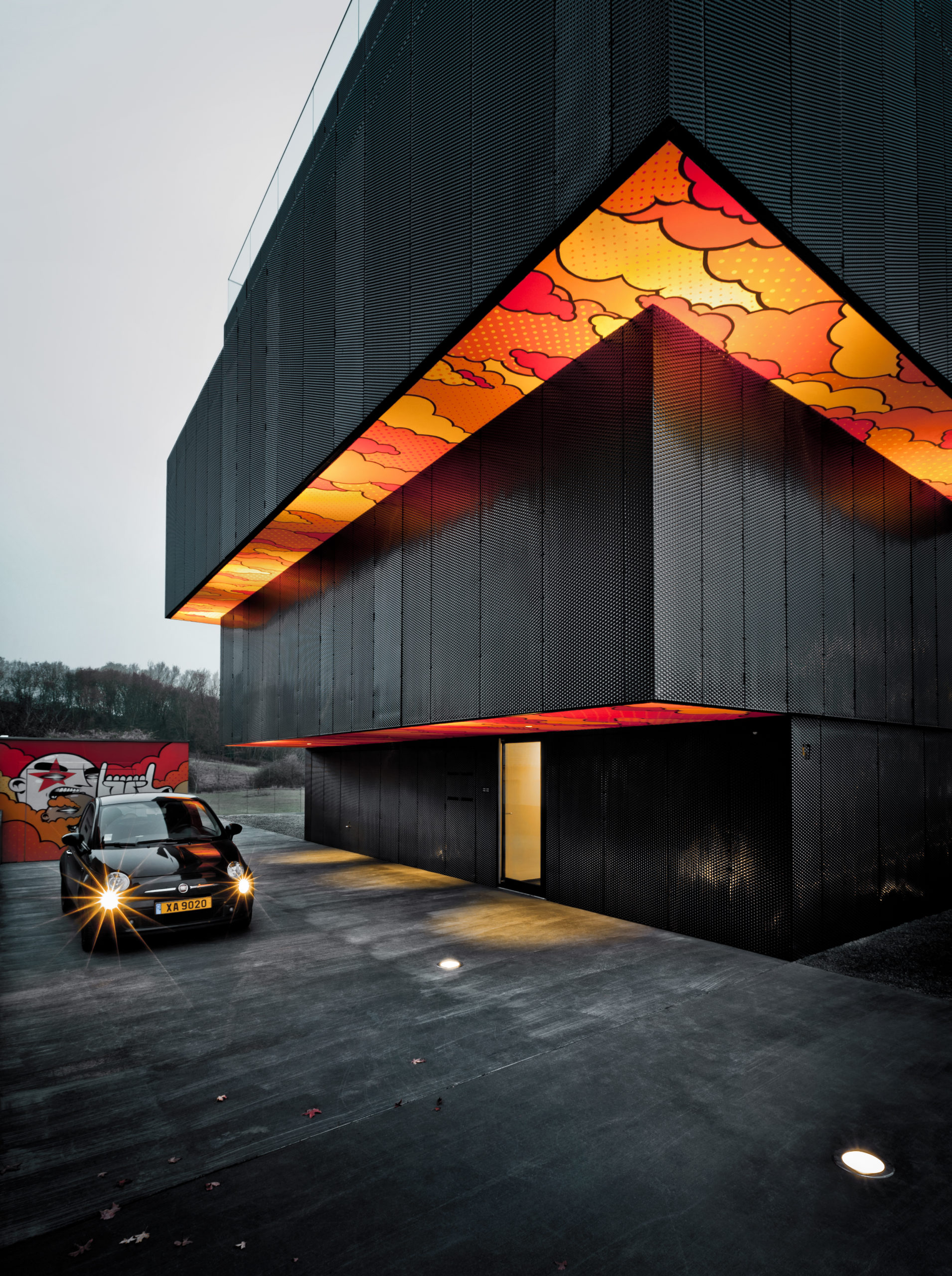 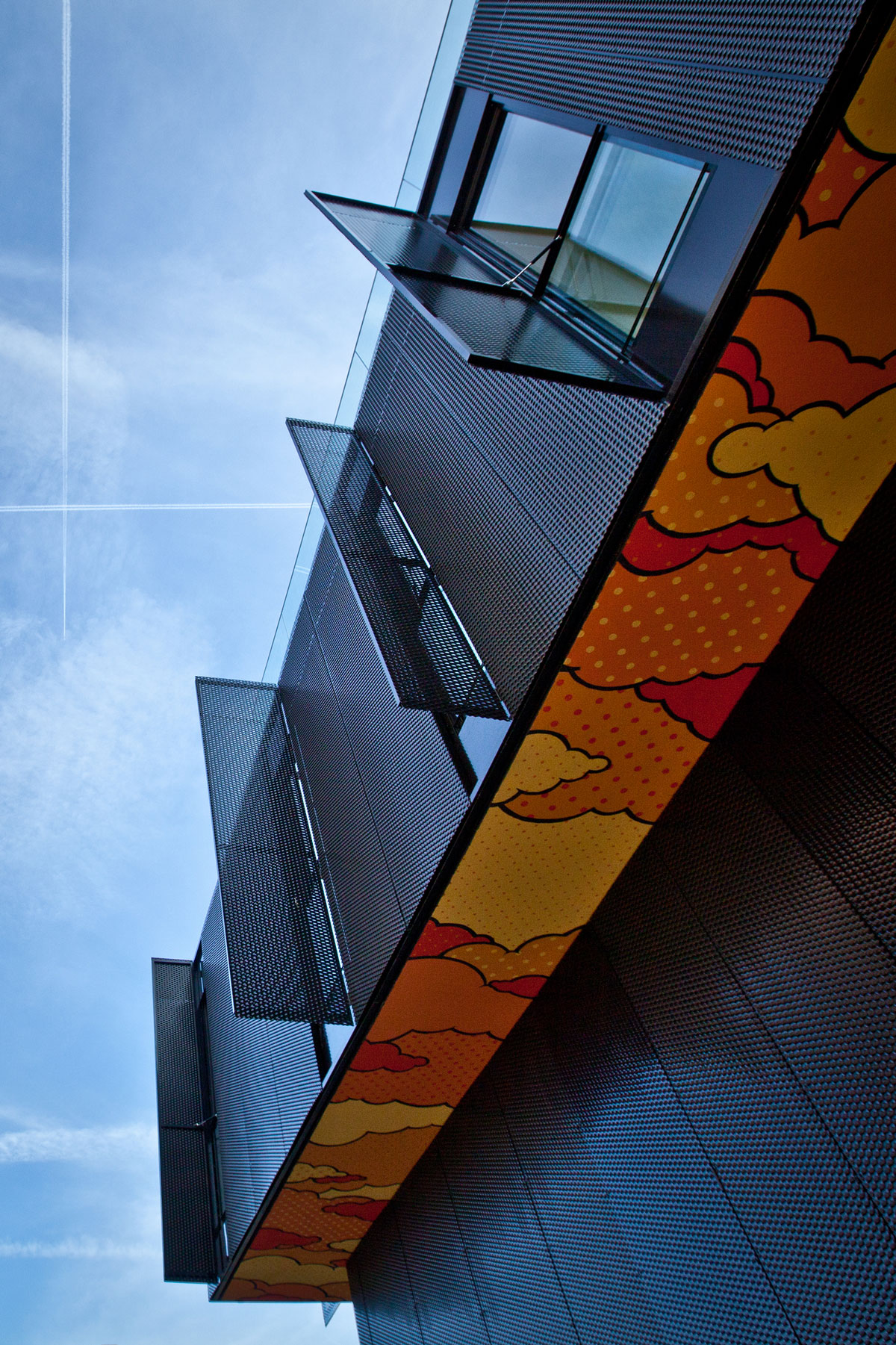 Considering the configuration of the plot, we aimed to liberate the three facades of the building from internal circulation, to bring light and offer maximum flexibility inside the apartments. Four apartments are situated on the 1st, 2nd and 3rd floor, with the garage on the ground floor. Living areas in the apartments are facing the street, and the facade sliding panels provide residents intimacy and protection from the town’s curiosity and noise. Sleeping areas at the rear benefit from more quiet and calm surrounding. 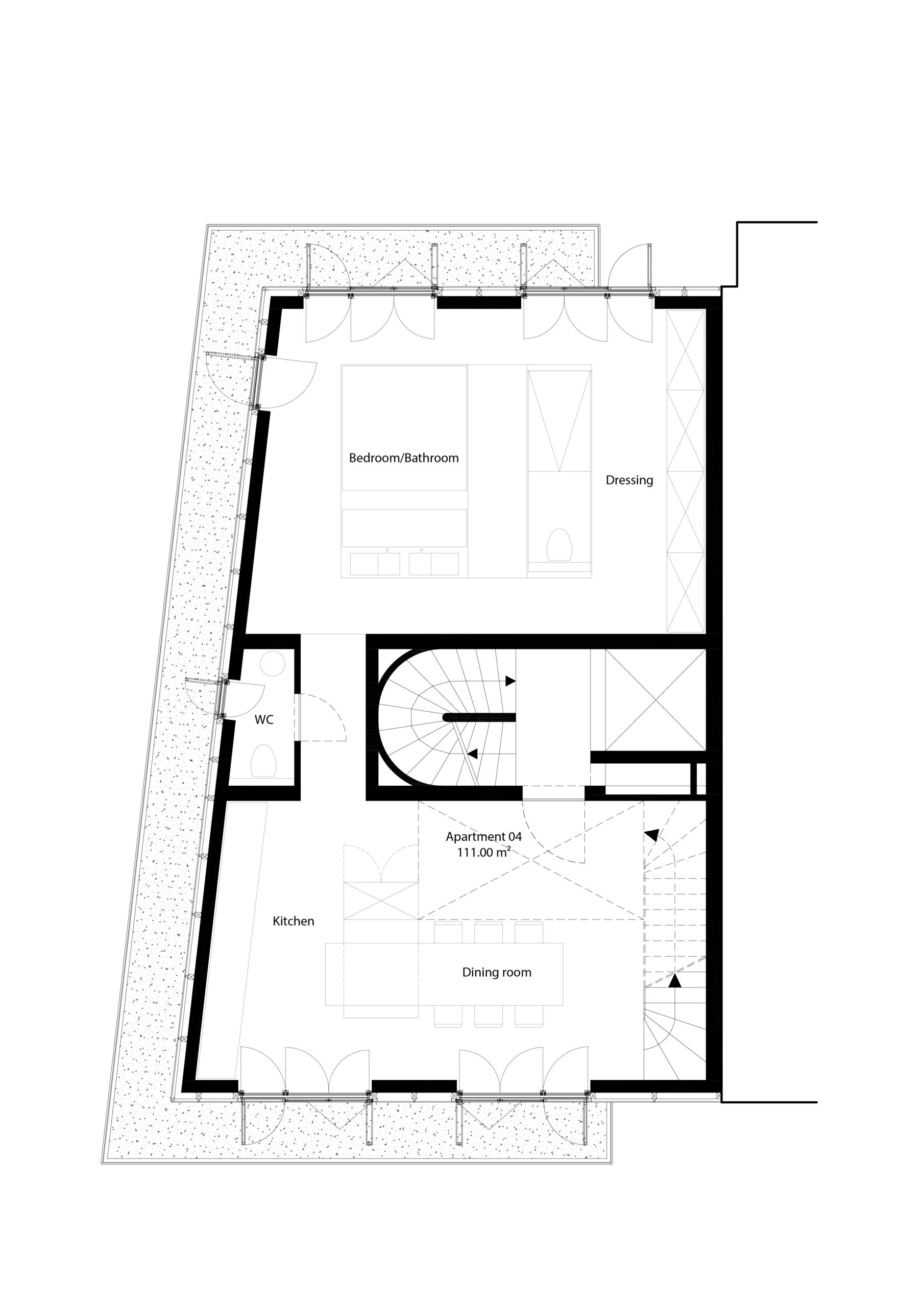 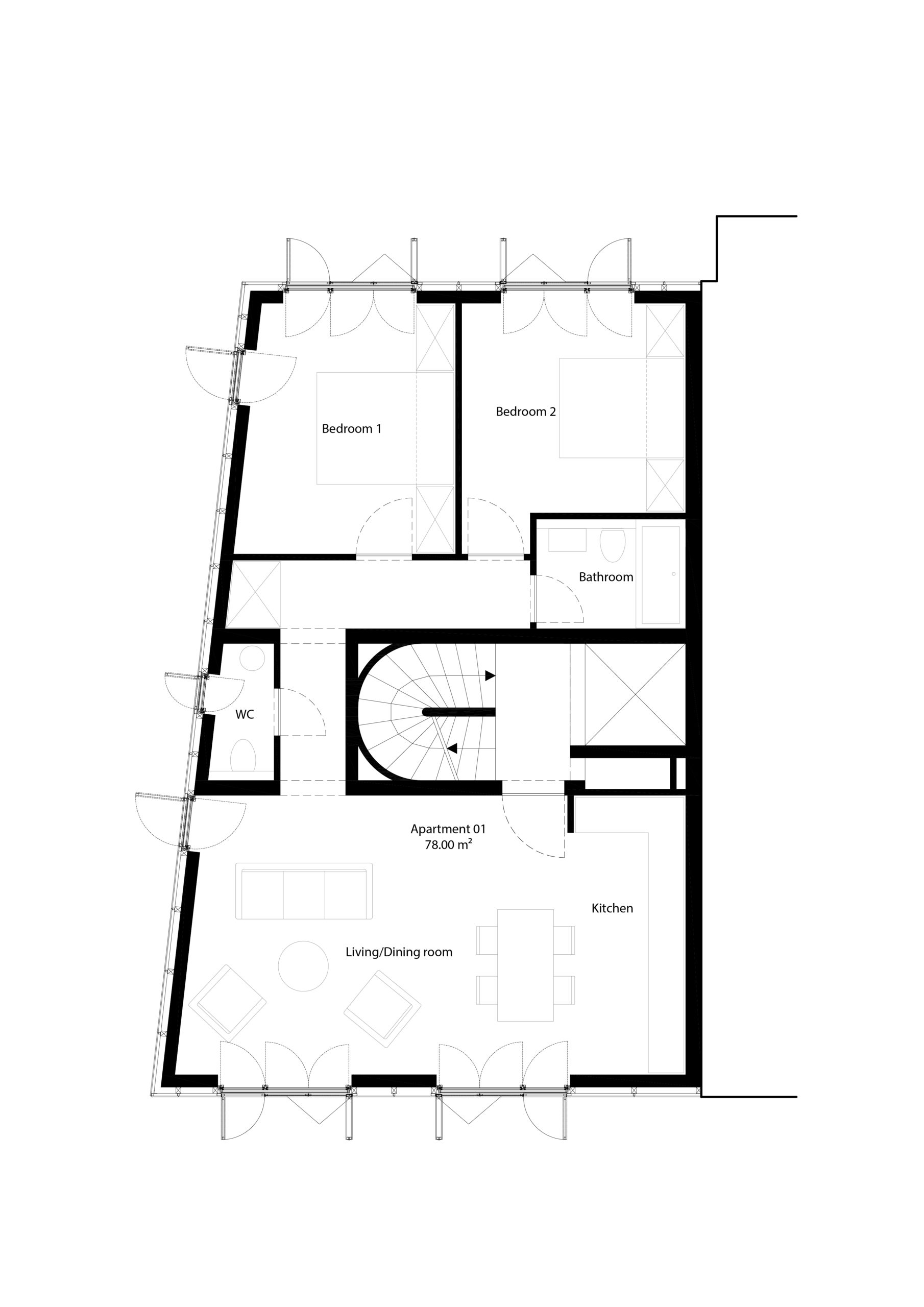 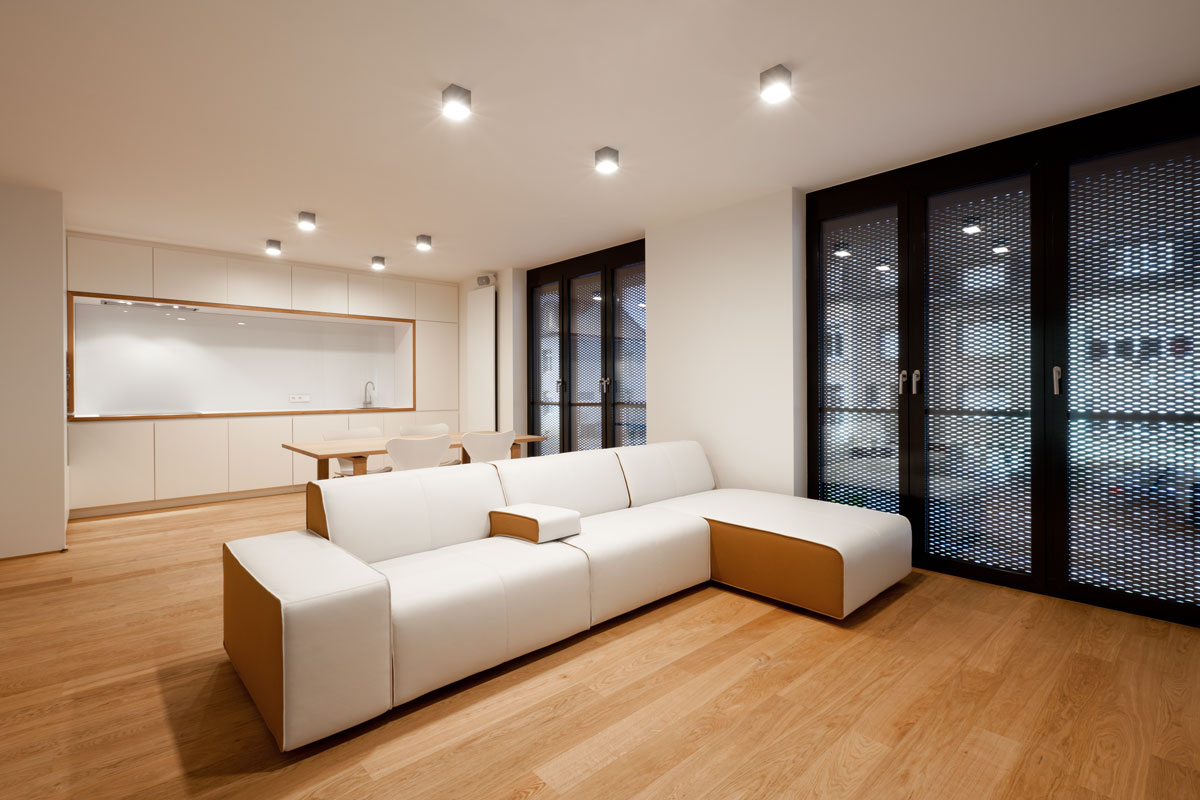 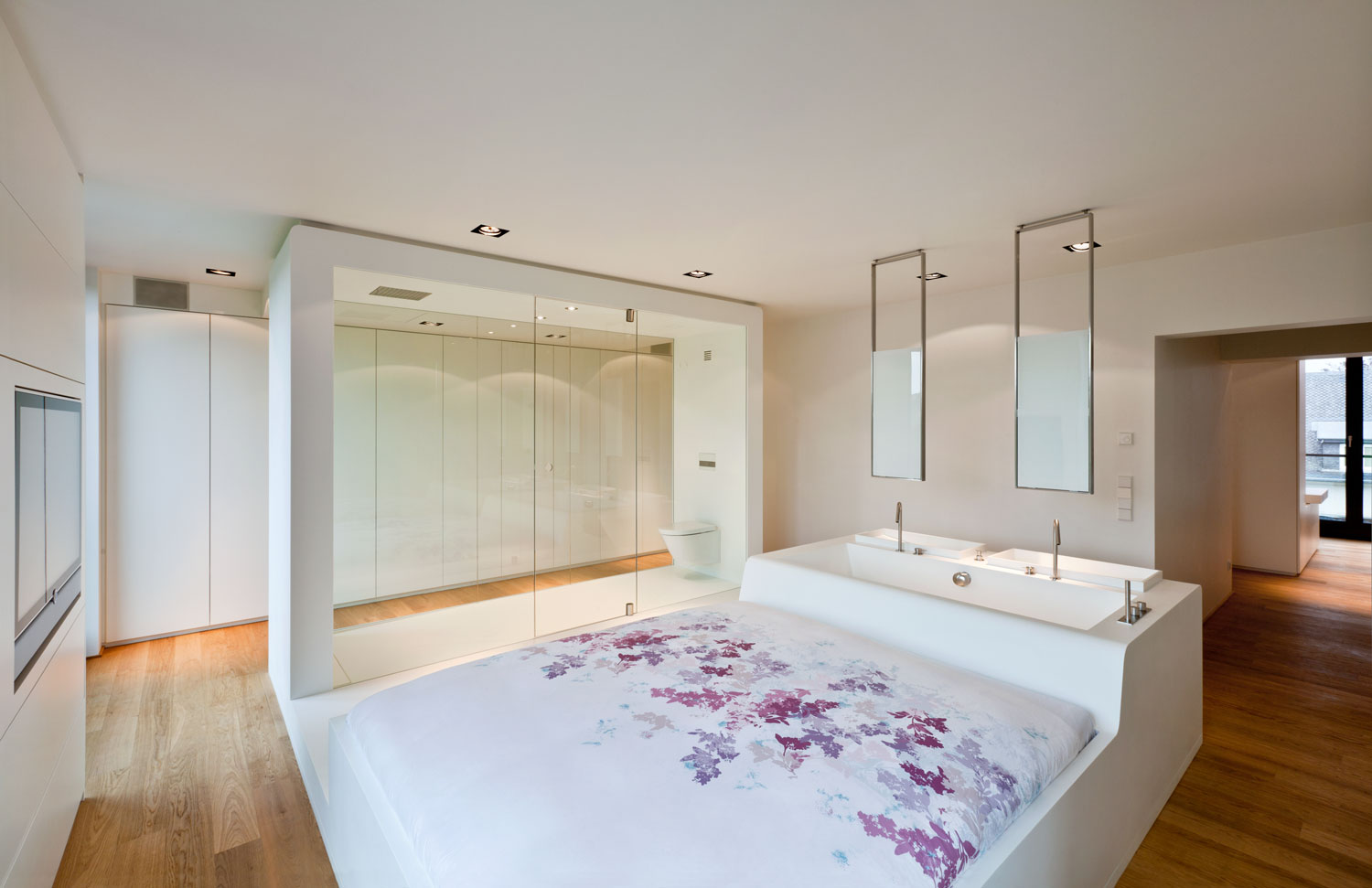 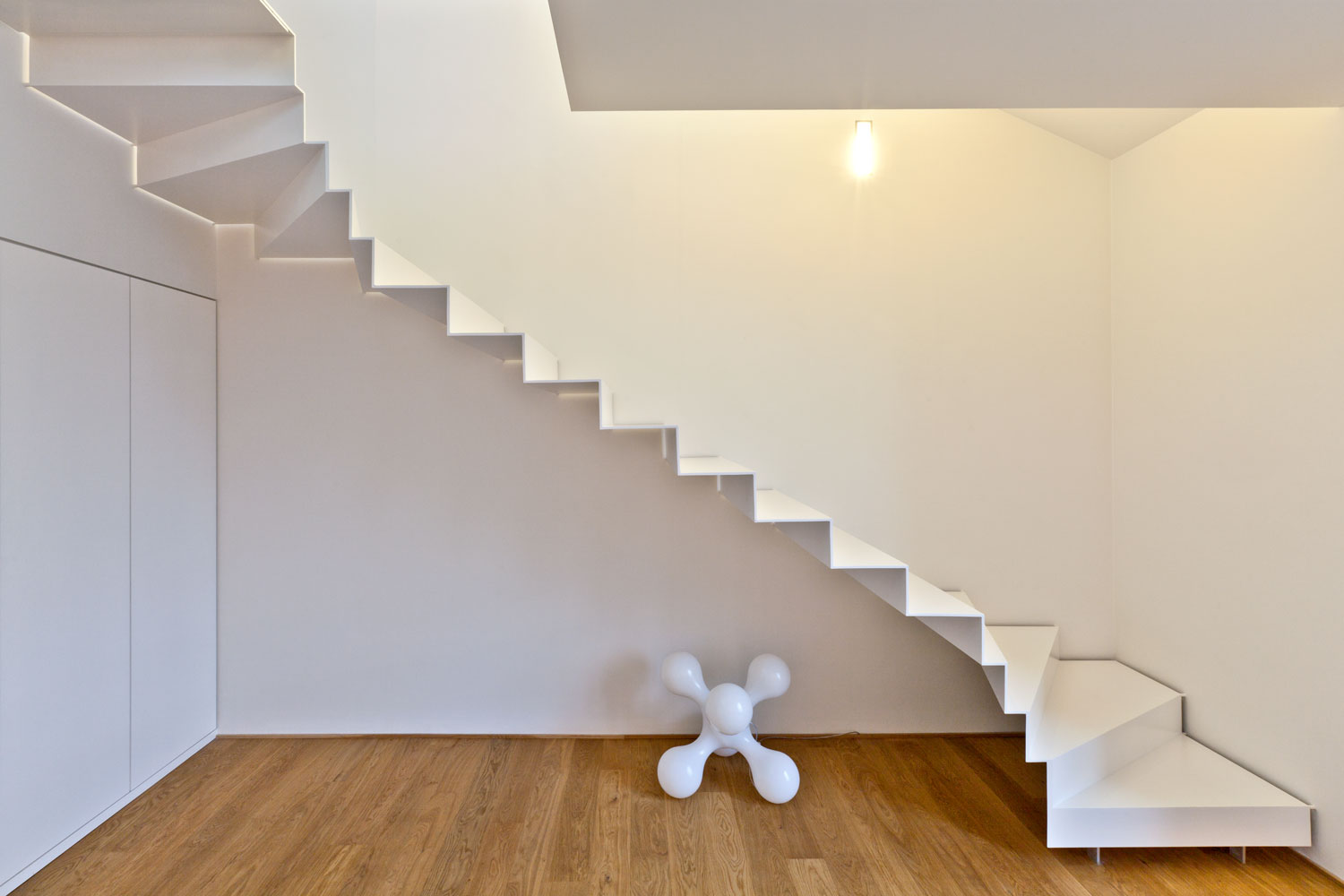 During the day, in good weather, the buildings offers a warm and intense aspect, that strongly contrasts with the absorbent materials of the neighbouring buildings (such as the plaster of the facades). In more cloudy weather, it seems to disrobe and blend in with the color of the sky… At night, the building lingers silently, while being subtly illuminated by the city lights. 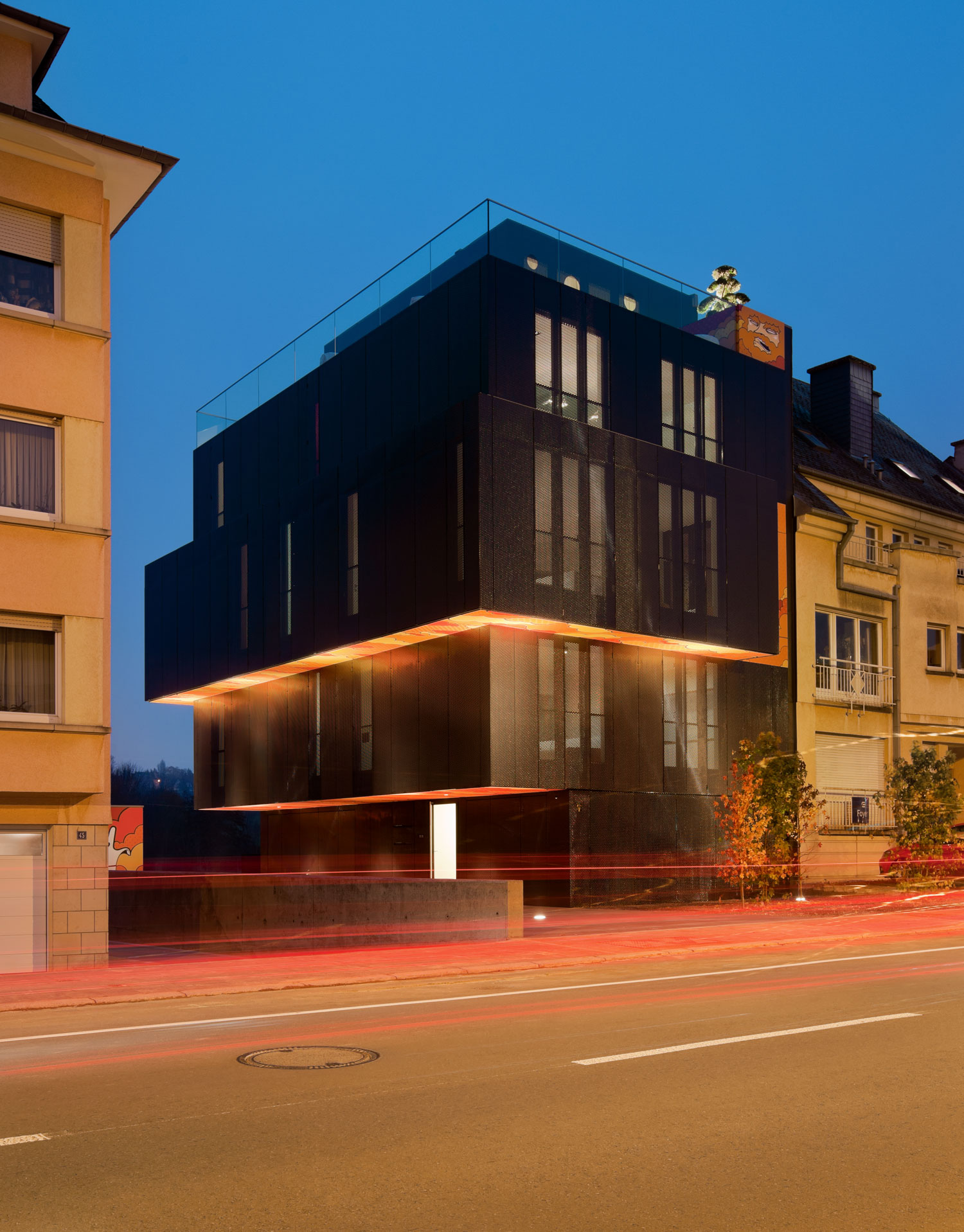 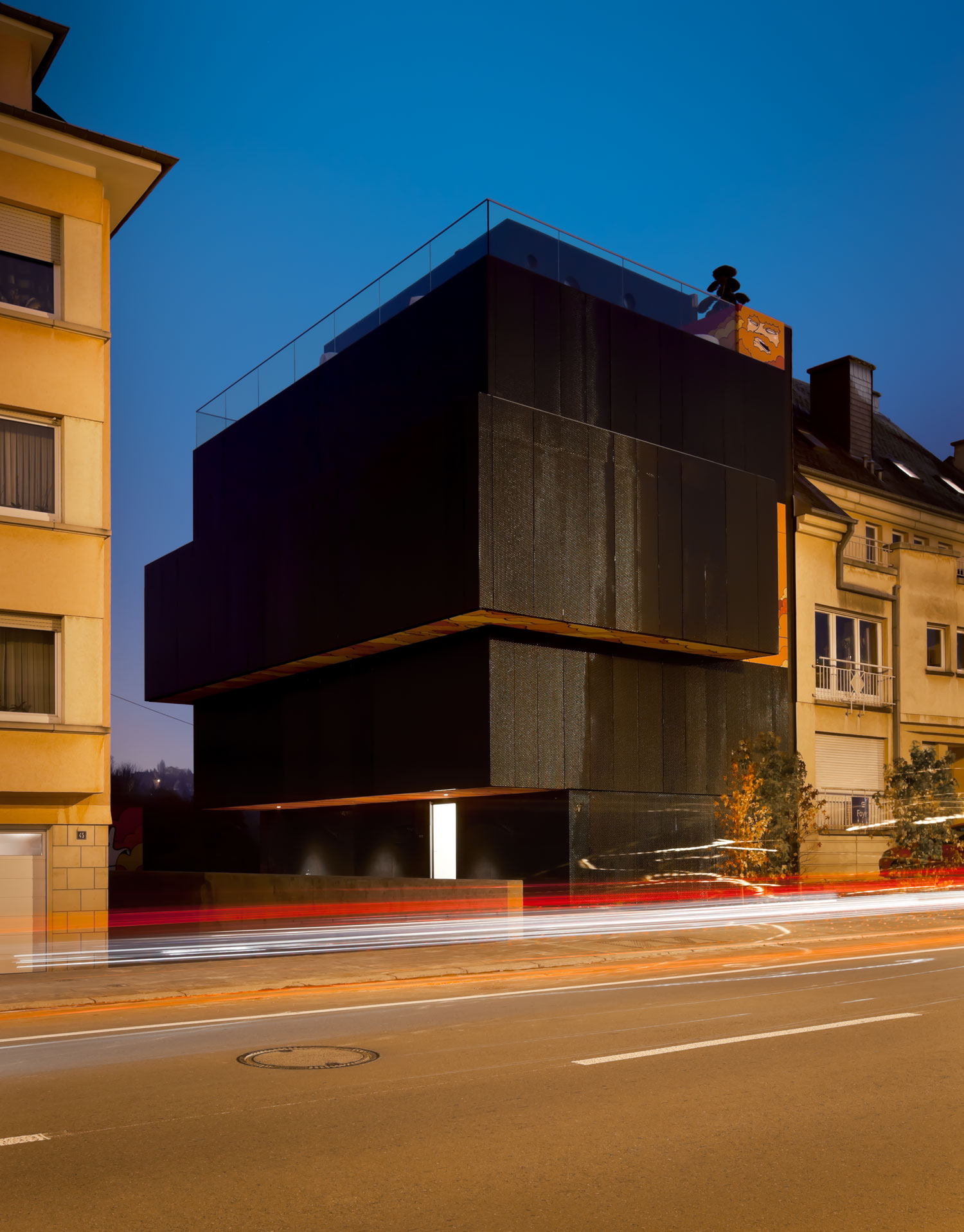 The success of this project is proof of the continual communication and mutual trust between the client and the architect. 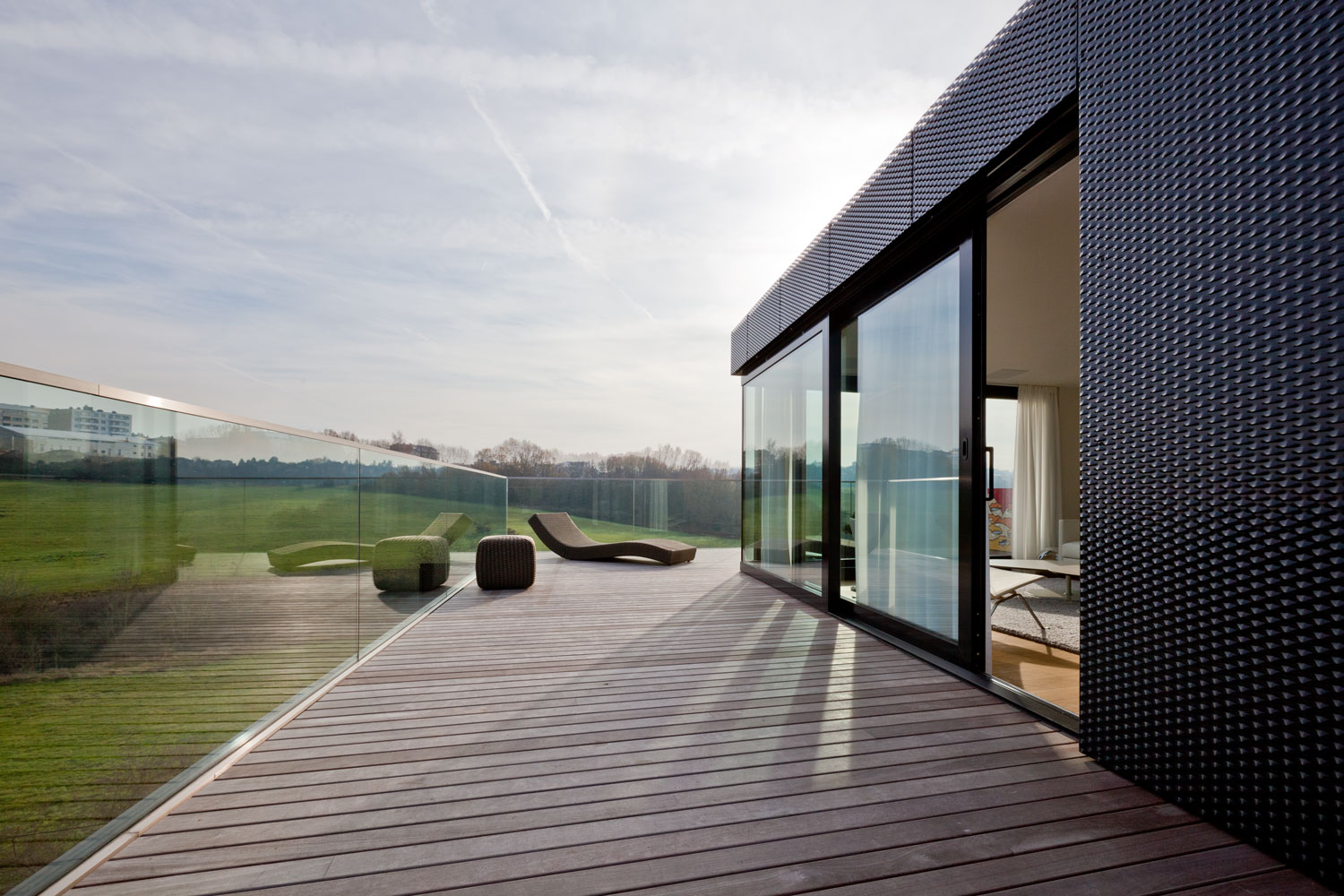